I have written several times before about the time I first heard The Sugarcubes in 1998.  I remember well walking into Our Price in Leamington Spa on the day ‘Life’s Too good’ was released and hearing it play in the store. I asked the guy behind the counter what it was and bought it right away, never looked back and still love that album today, and Bjork. This is true, and is one of the reasons I find Debut to be such an extraordinary album, the transition to solo artist was seamless and brilliant. The track I heard playing was Motorcrash and by the time I’d finished buying the album Birthday was playing.

In case you didn’t know The Sugarcubes (Icelandic: Sykurmolarnir) were an Icelandic alternative rock band from Reykjavík formed in 1986 which lasted until 1992. They released 3 proper albums and a couple or three compilations during their lifespan.

The band was, mostly: 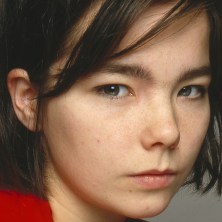 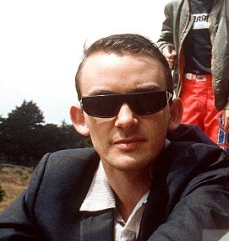 The entire band were made up of members of various bands from the Icelandic punk scene of the time, with all the members having been performing for quite some time. Bjork had been well known in  Reykjavik since she was only 11 and was a member of the band Tappi Tikarass:

There was also a sort of Icelandic super group called Kukl, that I’d never really heard of but I gave them a listen today and it is really pretty good, I like them. Bjork and a couple of other future Sugarcubes members were part of the band and they had two album releases to their credit.

After Kukl, the members of newly formed Sugarcubes thought the band a bit of a joke and that it wouldn’t really last very long, even jokingly naming themselves after the nutrition they relied on to survive while out on tour.

Following a string of singles, including Birthday which was championed by John Peel, and signing to label One Little Indian in the UK, their debut studio album, Life’s Too Good, was released in April 1988 to, I think it is fair to say, unexpected international success. As debut albums go it was an absolute stunner. Like nothing that had really gone before it and I believe it to have been hugely influential on indie music at the time, particularly in Iceland.

Listening to it again this evening, and using the language of the young ‘uns of today, it is full of bangers. Odd songs with strange lyrics and a shouty man jumping in all over the place, it was different and interesting. The lyrics of the very first track playing in the record shop (which is a now defunct chain) really gripped me, it was such unusual subject matter with a similarly unusual delivery:

[Verse 1: Björk]
Riding on my bicycle I saw a motorcrash
A proper motorcrash and lots of spectators
I rushed to the centre saw the injured parents
Cuts on the children an awful motorcrash

[Verse 2: Björk]
Took the mother sneaked with her secretly
All the way to my home and nursed her gently
Put on her bandages, gave her milk and biscuits
She sighed pleasantly after this awful motorcrash

[Interlude: Einar]
That girl on that bicycle showed great interest in all the motorcrashes
In the neighbourhood, she looked quite innocent

[Bridge: Björk]
Then we disguised ourselves took a taxi to her home
When her husband answered the door
She introduced herself, he said
“Where have you been all this time?”
Oh, oh, oh

[Outro: Einar]
But believe you me I know what innocence looks like
And it wasn’t there After she got that bicycle

It starts off all bit quirky and, with Einar’s commentary, becomes all a bit creepy really, in a Stephen King’s Misery sort of way (as a point of interest the book was released in 1987 and the song was probably written a little while before that, so it is doubtful they are in any way connected, but you never know)

Birthday on the other hand is a rather beautiful and odd poem put to music, reading the lyrics without listening to the song, it is undoubtedly peculiar, having done that and then listened to the actual song, it is doubly so:

She lives in this house over there, has her world outside it.
Grapples with the earth with her fingers and her mouth, she’s five years old.
Thread worms on a string, keeps spiders in her pocket, collects fly-wings in
A jar scrubs horse flies and pinches them on a line. she’s got one friend
He lives next door, they listen to the weather, he knows how many freckles
she’s got, She scratches his beard. she’s painting huge books, glues them together,
They saw a big raven; it glided down the sky, she touched it.
Today’s a birthday, they’re smoking cigars, he got a chain of flowers,
Sows a bird in her knickers, they’re smoking cigars, lie in the bathtub, chain of flowers.

I made a playlist below of most of the tracks and they genuinely fill me with joy, particularly the live versions included, it’s quite extraordinary:

The second album, Here Today, Tomorrow Next Week! I originally bought on cassette, back when I still used a Walkman, or a cheaper version of one at least. This resulted in an interesting listening dynamic as it was not particularly feasible to carry loads of cassette tapes around so I would put one in to the player in the morning for the walk to work and that was it, I’d listen at lunch and again on the way home, sometimes the same cassette would be in there for weeks. This is how I heard this album, almost immersing myself in it and shutting out the rest of the world for the duration. 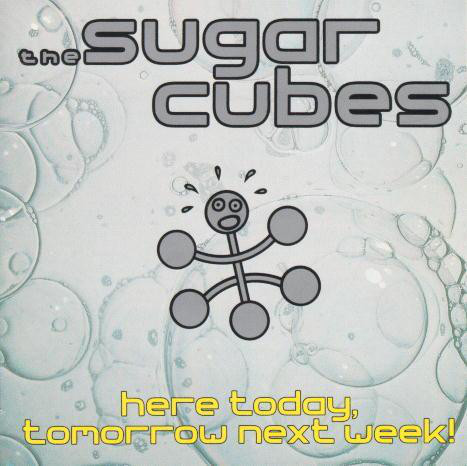 After the Cassette I did pick up a CD version and it was only last year I finally bought a vinyl version, which is 3 tracks short.

The album was released in 1989 and it featured a much larger share of the vocals for Einar Örn, which received rather a lot of criticism at the time. I don’t believe the criticism was warranted, although I do understand it, I probably would have wanted more Bjork and less Einar at the time and there a couple of tracks where I think Einar’s vocal was somewhat superfluous, however, The Sugarcubes weren’t Bjork, they were a band and that’s how they were set up. I guess the test would be to listen to the songs, which were written for two vocals, without Einar, they probably wouldn’t make sense and would have seemingly unnecessary instrumental bits. Without Einar, who knows, maybe Bjork would not have been able to rise to where she is today, we should all probably be thanking him.

Lyrically there’s a deilightfull quirkiness which may have evolved from many of the songs having been written in Icelandic and translated into English, such as from the opening track Tidal Wave:

There’s danger, danger!
A tide with an undertow, the sea is swelling
Impatience makes me foam
A wave inside me forces out big words
They splash and sprinkle
An angry torrent breaking loose, a flush or rushing joy
And again in Shoot Him:
There were four of us
One of us was the landlord
There were, we were on a drinking spree
I had eaten my take-away
I washed my landlord, he was covered in gravy
The others were amazed how dirty he was
How I was, but I said,
He never took a bath,
He never takes a bath,
So why, why don’t we just shoot him?
Interestingly these were Einar’s vocal with Bjork joining in on the last line, although I could easily imagine her singing those words.

As before, below are most of the songs from the album, many live, some in Icelandic. Is the album underrated? Yes, I’d say it was by many, all ratings at the end of the post.

Bonus tracks on the cassette

Then came Stick Around For Joy, which is their third and final proper album, released in 1992, just a year before Bjork’s first solo album, Debut, was released.

9th January 1992, The Sugarcubes perform Hit on Top Of The Pops (The date is wrong on the video below) . I was 25 by this time and just sat and gawped at the screen, it was just perfect. I remember watching, and watching and then, yes, they aren’t lip syncing, this is a live vocal. By the time it was over I really did think what the hell are TOTP going to do now having opened with that.

My memory fails me but I looked up that episode (chart positions in brackets):

Well it was all downhill from The Sugarcubes in my opinion. Just in case anybody is thinking about that Queen number 1? Well it was just after Freddy Mercury died, so it is understandable, but the song was 17 years old at this point and I really would rather listen to Hit.

There were 4 singles released from the album, Hit being the only one to chart, peaking at number 17, the others being Walkabout, which has the following delightful lyric:

Delicious boy,
With animal eyes,
Beautiful buttocks,
Haunting movements.
But the thing that makes me love you
Is the unforgettable smell of your skin.

Vitamin & Leash Called Love were the other two singles and they all, in my opinion deserved to do better than they did.

Stick Around For Joy was probably as far as the band could go with then Bjork/Einar combination. The album is filled with really good songs, as were all three, but it was time for change after this one. There were a couple of other albums, It’s-It released in 1992 which was a remix album and it is pretty good, and The Great Crossover Potential which was a greatest hits/best of that was released in 1998. There is also 12:11, a box set released in 1998 of 11 12″ singles which is well worth picking up.

The Sugarcubes were great while they lasted, and I would have loved to have caught them live (maybe one day there will be another re-union, there was one gig in 2006, in Reykjavík but the chances of getting to that were 0) but I do think stopping at 3 albums was a wise decision although while Bjork continued here rise it would have been nice to see the rest of the band continuing as it isn’t all about Bjork, the whole package was brilliant.