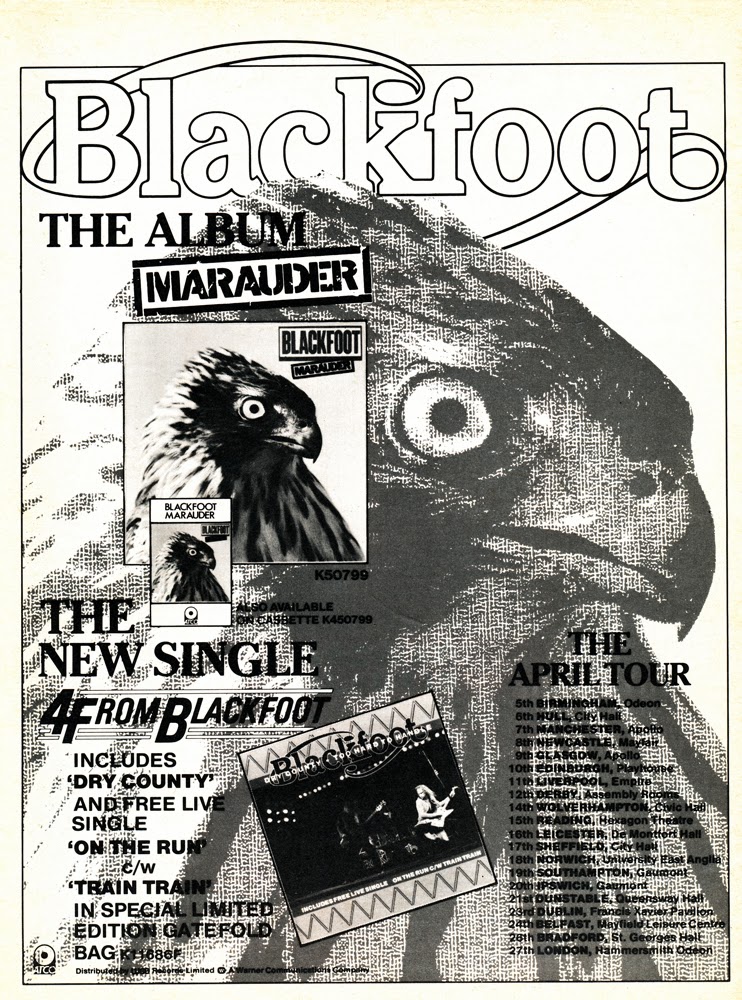 I read a post here by 80smetalman and it reminded me of seeing Blackfoot at the Hammersmith Odeon in 1982. It was one of only three visits I ever made to the venue, but I would read Melody Maker or Sounds every week and see ads for bands playing there and desperately want to go, but I was a kid with no source of income, hence only those three visits.

Blackfoot were quite the thing at the time at school, there was a lot of people into them but only two of us went, myself and guy called Andy who I haven’t seen or spoken to for 35 years, so I have to go on my own recollections. We had seats in the balcony but still had an excellent view and everybody stood up when the band came on, which seemed weird as I thought that would be the sort of thing the people downstairs would do as we actually had a better view sitting down, but it was a rock concert of course so everybody should stand up, I was young and inexperienced, I didn’t know these things.

The gig that night was amazing, the band were tight and seemingly had boundless energy. I believe the Live album they released, ‘Highway Song Live’ contained some of the tracks form this gig, it was recorded on a 1982 UK tour so it is very likely. As far as I know the track list on the night was:

This sounds about right but I can’t be sure.

There are videos on youtube labelled as Hammersmith 82 but I think, from the comments, that  they may actually be from 1980 as I don’t remember seeing any cameras at the gig. They do, however look very familiar, especially the knee length denim coat worn by Rickey Medlocke. The ticket below isn’t mine but I do have this very vague recollection that the gig was postponed for some reason, hence the date being re-written in pen, but it was a long time ago so the memory is hazy.

I bought a sweatshirt at the gig and I think I wore it home on the train afterewards, unfortunately, about  a year later, it went ‘Missing’ off the washing line and I never saw it again. This was the image on the front of it, I think it had tour dates on the back:

I think we should have a look at those videos (which aren’t great image quality) that purport to be Hammersmith ’82, and some others from the same year.

From 1979 to 1982 Blackfoot released a trilogy of almost perfect Southern Rock albums, and finished up with a live album that incorporated the best of their output and their live performances.

I still have my copies of the middle two albums, but I’d probably say that Marauder was my favourite of all their albums, though there are plenty of great tracks on the others. It was all killer and no filler:

In 1982 I had to choose which albums I bought very carefully as I had no money at all, being 15 years old, and choosing to buy Marauder was a big thing. I bought Tomcattin later, even though it was released earlier and never bought Strikes. I’m pretty sure I had a copy of the live album at some point but I’ve no idea what happened to it. So the cost of going to the gig and buying a swetshirt as well as a programme (I think so anyway, I recognise it) had to be quite a considered thing.

As a result of eveything above I’ve been listening to Marauder again today and it brings back all sorts of memory snippets, nothing worth writing down, just general fragments of nostalgia. Above all though it reminds me what a bloody good band they were.

You may recall a post a made about going to Reading Festival in 1983, I actually also went the year before, but only for the Friday, not the whole weekend.

I was 15 at the time and didn’t have a ticket, but a friend did, although he couldn’t go on the Friday so I took his ticket and the plan was that I would leave the site on Friday evening, remove the wristband and give it to him so that he could put it back on, which is exactly what happened. No drama really, not at that point anyway, the drama all happened earlier.

I was supposed to travel down with  a group of lads who were in a sort of secondary circle of friends, so not people I hung out with all the time but did now and again or one or the other of us would be in a group, not close but part of a wider group I suppose. I headed up to meet them early on Friday morning and they’s already left, which doesn’t surprise me at all, they were dicks. I caught the train from Didcot to Reading on my own, sitting opposite a long haired guy with a hard shell guitar case, I didn’t recognise him though so I mostly ignored him. I had long hair myself back then, which I was going to post a photo of, but after a decent search I can’t find any, I’ll ask around and see if I can come up with something. 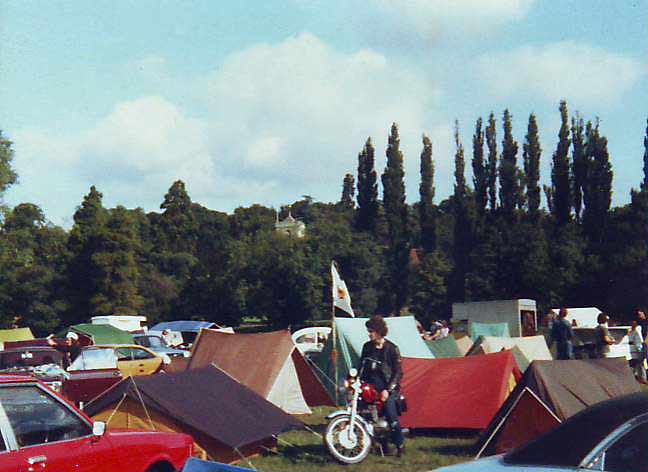 Anyway, I arrived at Reading station alone and as I left the platform I was collared by the police.  They took me into a side room at one end of a long corridor that led out of the station and proceeded to strip search me. Pretty much everybody that was leaving the station could see me getting undressed as one wall of the room was essentially a wire fence. I told the police I was only 15 but they either didn’t believe me or didn’t give a crap, they found nothing of course and sent me on my way.

I made my way to the site and the first band of the day was ‘Against The Grain’, never heard of them then or since, but the bass player there in the picture below, he was the guy sat opposite me on the train.

I was sat on the grass a little way back from the stage, there really weren’t many people there at this point and the band sounded decent. The drummer threw one of his sticks into the tiny crowd and one of us caught it, can’t remember who though. I bumped into the group who left without me almost as soon as I arrived, I could tell that they’d done it deliberately, it was pretty obvious, but I wasn’t going to let it ruin my day and just ignored it.

This is where things get a little hazy as I can’t remember the next three bands at all. The Angels, Stampede and Overkill, no idea whatsoever. I do remember Tank though as I had their album and, despite quite a number of people ridiculing me for it, even to this day (yes Dave, I’m looking at you). This is them back in 1982:

And this is them on stage at Reading in 82:

The album was called ‘Filth Hounds Of Hades’, which is nice, and it looked exactly like this:

I have a vague memory of ‘Praying Mantis’ and no memory of ‘Trust’ but I do remember ‘Randy California’, probably because I was wandering around the campsite and not really paying attention as I really didn’t like or know most of the bands on that Friday. The ones I really wanted to see were on Saturday and Sunday and I wasn’t going to get to see them. Here’s ‘Randy California’ recorded Live at Reading in 1982, somewhere, I’m in the crowd watching:

I’m also in the crowd watching ‘Budgie’ and listening to a pretty good quality recording of it right now, almost 35 years later. You can listen to if you like:

My Dad met me outside after the gig and drove me home, I didn’t want to leave, and if I was a bit selfish I didn’t have to, I could have stayed there, after all, I had the wristband, but I wasn’t. I did go to the whole thing the next year though of course.

This, of course, is entirely from my own perspective and others will have completely different opinions but as I sit here listening to Side 1 of a vinyl copy of ‘All The Worlds A Stage’ by Rush, I got to thinking, what are my top ten? So here goes: 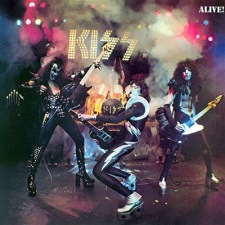 8 : Lynyrd Skynyrd – One More From The Road

6: Motorhead – No Sleep Til Hammersmith 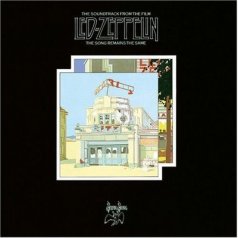 1: UFO – Strangers In The Night

And there we have it. I know there are what might be considered essential albums that are omitted, but these are the ones that I have the most affection for, from that time when arguing about this sort of thing as a teenager was a great way to pass the time and a wonderful reason to listen to them all again.

Here is a compilation of tracks from the albums above in descending order:

Not necessarily from the albums mentioned, as they are a bit old, before youtube was even a twinkle in its creators eye, but closeish to when the albums were originally released.

Here’s what I thought about but didn’t include, let’s call them honourable mentions or something: