I mentioned a little while ago that I had subscribed to the vinyl service – That Special Record – and yesterday I opened the first package from them. 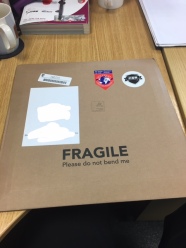 It’s a double vinyl from ‘The Gods Planet’ titled ‘LP2’. Here is how it is described by one site:

Nietzsche once said: “I would only believe in a God who could dance”. The 2nd The Gods Planet LP, simply titled LP2, is ample proof that you can trust in Claudio PRC and Ness to make you dance. Built upon pieces of music purposely made for a live presentation at Paris´ well-regarded Concrete club, it sees the Italian duo of techno producers applying a willingness for inner and outer discovery, and a more human outlook to the brand of thoughtful, detailed, yet emotional and powerful productions, which they have built their name upon. New machines, techniques and skills are dexterously applied to the foundations displayed on the 1st album, from 2013, making it more direct and overtly danceable, not as experimental but certainly as explorative as before. It is the sound of two artists further more at ease with their standing in the scene, taking stock of their surroundings, before further ventures into the unknown, but still as interested and skilled as ever in telling stories. And what´s presented here is a compelling story of self-discovery woven into Claudio and Ness´s vision of techno and house music.

This is quite possibly true, I really haven’t had a chance to listen to it properly. The main question that arises is, do I like it and do I think that my money was well spent. Early indications on whether I like it are good, that’s as much as I can say on it for the moment, at least until I’ve had a chance to have a proper listen and to have lived with it for a little while.

It’s double black vinyl and as well as the note you can see in the image there was a separate inner sheet with a bit more information on. The track listing is:

Now, as for price, I paid €28,00, I’ve seen it priced online at €14,99, however, there was €7,98 shipping to add to that and that was not for international. I’ve written myself a little questionnaire to make it easier to clarify my thoughts.

Would you have chosen this album if you had stumbled across it yourself? :
I don’t think so, but I did know what I signed up for and I don’t dislike the album, though I do find it a little one dimensional musically. I am wondering how often I will be moved to play it in the future, I suspect it will be rarely.

How was the service provided, from a delivery perspective? :
No complaints there, it was well packaged, arrived in one piece and the album was already in a protective plastic sleeve, which is handy as it saves me using up one, although they are only 10p each it’s still good.

What are your thoughts on the price you paid? :
I found the album at €14,99 online, which suggests that this is the retail price or thereabouts, so the rest of my subscription went on what? Post, packaging, a plastic sleeve and a leaflet, which is €13,01. I don’t usually deal in Euros so I have to convert to £ for me to really get a sense of it, so we are looking at £21.87 for the subscription, £11.71 for the album and £7.94 for the rest.  When I look at it in those terms it does seem much more reasonable to me and, depending on the length of your subscription you can get the overall price down to €23,00 (£17.97).  That £7.94 for the rest though, it feels a little high to me but I guess I am paying for only having a month on month subscription.

Are you going to renew your subscription? :
I already have. I’m in for next month because I was really interested in some of the previous releases and, while this first album may not be exactly what I was hoping for, ‘That Special Record’ have built up a month on month list of releases that make it worth continuing to see what I get. Also, jumping back to price a moment, there is the curation aspect which I accept attracts a fee and is a portion of that £7.94 over and above the cost of the album.

More info on this subscription service can be found at http://www.thatspecialrecord.com/

Let me know what you think.

Oh, one other thing, I do get a nice e-mail every weekday with a recommended album on it, you can sign up for that yourself as it’s free.

2 thoughts on “That Special Record – Update”