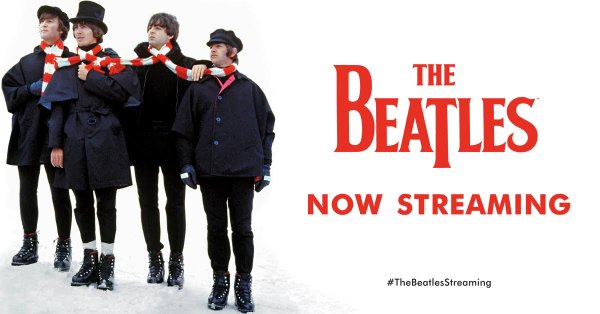 Streaming Music sites now have The Beatles back catalogue, 13 Studio albums and 4 compilations, on Spotify, Apple Music, Amazon Prime and Google Play, and it makes me a little sad. I’ve mentioned before that I am an incompleteist when it comes to record collecting, I don’t need everything ever, just enough so I’ve got most of it. At one point I had everything by the Cocteau Twins except one 12” single, which I never bought even though it was in the record shop and I could have, I just didn’t want to own everything, because then there is nothing left to get. So I rather liked the fact that there were things missing from the streaming music sites, the biggest of which is probably The Beatles (I don’t have much interest in Taylor Swift or Adele but enjoy my inability to not be able to access them and listen).

I wonder how far we are from music only being released on streaming sites, no physical product at all, not even an MP3, just access for a flat fee to everything that has ever been recorded and everything that ever will be. We will no longer ‘Own’ music but rent it on a play by play basis. It once was Vinyl vs Cassette, vs CD, vs MP3, but selecting from everything, at any time from a device that is always in your pocket, well, how can it fail? There are kids growing up now who will know nothing but streaming and will not hark back to ‘The good old days’, what does that spell for the creation of physical product, its death knell perhaps? And what is going to be the big rival to streaming? Something we don’t even have to interact with, that analyzes our moods and plays whatever it computes bests suits that moment, maybe even composing music specifically for that mood at that moment, making the pop stars of tomorrow creators of algorithms, after all, music can be broken down by math.

Until then, and after then, I shall spend the occasional Sunday afternoon with my Beatles vinyl reminiscing about those good old days, even though I was only three when they broke up.